One of the most prominent symbols of nomadic culture are the tents they live in, or as they’re referred to in Turkic languages, “yurts.” For yurts, the design, aesthetic, and details regarding regular usage offer the same and more as either regular tents or other forms of accommodation.

Yurts form an incredibly important part of Central Asian nomadic societies, with designs that have been used for centuries and with techniques and usage for these tents that are still used up to the present day. They usually feature a steam bent crown or compression wheel supported by roof ribs which are bent to meet a lattice wall which is also steam bent. From there it is usually covered with a felt made out of sheep’s wool that is used particularly for insulation by the nomads of Central Asia and is especially popular as the primary fabric for weatherproofing yurts.

The first time we have the concept of a yurt is from the Ancient Greek texts of Herodotus. He described tents very similar to yurts as where the horse-riding nomadic peoples the Scythians lived. Today examples of Yurts can still be found all the way from between Anatolia to Mongolia as a symbol of culture.

Yurts of course don’t catch the eye only for how they’re used, but also for the aesthetic value. Some of the most notable features that make these tents so special are the materials forming the outer shell of the tent and the wealth of motifs that come from the cultures and religions that have influenced them over the centuries. Motifs include traces of beliefs from a wide range of religions, including Islam, Shamanism, and Buddhism. Nature and animal figures as well as motifs like the sun and the moon, or mythological figures like dragons are all common amongst the motifs from religion and culture. When we examine the meanings these motifs carry with them we see that the aesthetic purposes of these tents goes beyond the purely practical usage elements. There are some fine examples of needlework, clothing, kilims, and carpets with the same motifs. When we take the time to really examine them, we see that these apparently simple figures actually shed light on quite a lot of history including which motifs were created under the influence of which religious beliefs, how motifs inspired culture and vice-versa, and how different time periods and places viewed things differently.

Yurts are thus really a valuable cultural heritage for their aesthetic, their usefulness, the techniques used to make them and what they tell us about history and the traces left by so many different cultures in them. 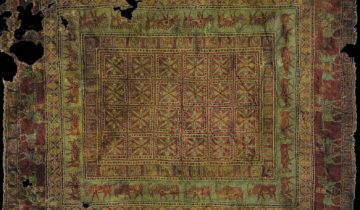